Free shipping in the continental US

A VERY SHORT HISTORY OF EUROPEAN AND AMERICAN PAINTING:

Easel painting, as opposed to wall paintings or murals, has evolved over centuries. We are looking at American art of the 20th century that has its roots in the tradition of European painting. Several factors have contributed to the evolution in art, but the most important changes are the easier access to materials and a wider audience for the arts.

European painting (not including ancient wall paintings) were created almost entirely for the churches by artists that trained under a master and then became members of a guild. Artists frequently began training under a master at the age of 12. They learned to draw by first copying prints done by an expert (called a "master"), then by drawing reproductions of classical sculptures, and finally by drawing live models from observation.

Professional guilds of every kind were formed throughout medieval Europe to limit competition, set standards in quality, and control trade. Only members of the guild were allowed to practice their trade within city limits. They also served social and religious functions, organizing celebrations on feast days and providing financial assistance to members families-- especially widows. They gained power as Europe transitioned from the feudal system to capitalism. Guilds were exclusive, conservative, and controlled who had access to apprenticeships. They also limited the number of practitioners who were able to become a journeyman or master.

Technological innovations and an increase in imported goods challenged the ability of the guilds to maintain market control. They were abolished by decrees across Europe from around 1790 onward.

Paintings were usually created in a workshop and were a collaboration between a master and his apprentices. The master often designed the image and turned the drawing over to his apprentices, who would then copy the design onto the surface and do the majority of the underpainting, with the master finishing the work. These artists depended on the wealth of the Catholic church and royal families to commission their artwork, and so the subject matter was primarily portraits of saints, bishops, and royalty or illustrations of biblical scenes.

The printing press was not invented until 1440, so very few people could read. Therefore, it was the role of the artist to illustrate scenes from the bible for the viewer. A large vocabulary of biblical symbols would be easily recognizable to contemporary viewers.

Books were made by hand and were enormously labor intensive and expensive to produce and therefore were made by the church. Therefore, the subject matter was almost entirely religious and included the entire bible or passages from it, prayers, or moral tales.

Monks (who could rarely read) copied text into their own hand-written calligraphy, then an expert in decorative painting filled in the margins and then another artist painted the scene. The gold leaf used in these books gives them the name "illuminated manuscript."

Artists or their apprentices had to ground their own pigments, mix them with oil, and prepare an archival surface, which took further skill and materials. Art was surely created by amateurs during this period, but we are speaking here of art that has remained in the public awareness.

An increase in the number of people with disposable income to purchase art also gave artists the opportunity to explore new material. Still, art was not widely available to the public, except in the form of prints. Paintings were on view in cathedrals or in private homes. Some collectors invited friends or scholars to view the work in their possession, but public museums did not exist until the 18th century.

Art academies replaced the guild system, which meant that more aspiring artists had the chance to acquire skills. The first academy opened in Rome in the 16th century and others opened throughout Europe in the following decades. They provided training, competitions, and exhibitions, which also meant that they allowed or denied access to exposure, clients, and commissions. Artists had to pass entrance exams and then studied for years, using the same system of the guilds- copying prints and then sculptures before drawing from live models. They had to master drawing skills before approaching painting. The academies established a hierarchy in subject matter, reserving the most prominent exhibition spaces, highest awards, and greatest prices for paintings in this order: history painting (including Greek/Roman mythology and biblical scenes), portraits, landscapes, genre (often "moralizing" scenes), and still life.

While the academy of Rome was the mecca for the study of classical painting and sculpture, the Academie des Beaux Arts in Paris was the most important for the careers and reputations of artists in 19th century Europe. Judges of the exhibits determined the trajectory of its students, as collectors looked for their stamp of approval.

They favored the invisible brushstrokes and idealized versions of history and mythology created by William Bouguereau, Jean Leon Gerome,  and Thomas Couture. 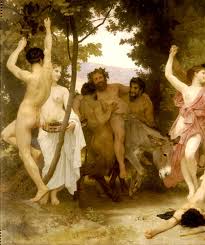 Thomas Couture, Romans in their Decadence, 1847

History painting was considered the most important, followed by portraiture, "genre" painting (scenes of everyday life), landscapes or cityscapes, animals, and finally, still-lifes.

As the audience for art grew (this includes buyers) and materials became more readily available, subject matter changed. Common subjects included still-lifes, called "vanitas" paintings, which displayed an abundance of wealth and symbols of the brevity of life. These symbols included skulls, extinguished candles, and flowers. They frequently included symbols of life's pleasures, too, like musical instruments, food and drink, and books.

In the 1600s, new subject matter for painting included landscapes, scenes of everyday life (called "genre" painting), and animal painting. These were easier to sell than the more expensive paintings depicting historic scenes, and became abundant.

We'll skim over the evolution in landscape painting and jump to a movement in French painting called Realism, which brings us closer to where we are today. This trend in painting emerged around 1840 and focused the attention of painting on real people, particularly those of lower economic classes, doing ordinary things. There were a lot of very important changes to everyday life that resulted from the Industrial Revolution. Cities became more crowded and polluted as workers left the countryside to work in factories. This movement in painting honored the working class and omitted the signs of wealth that had been an important part of portraiture previously. It was also influenced by the invention of the camera and introduction of photography. Artists began to imititate the photograph's ability to capture imperfect scenes, rather than idealized and invented ones.

The leader of this movement is considered to be Gustave Courbet.

Industrialization impacted the living and working conditions of society and artists grew tired of the limitations set by the academy. They experimented with new techniques and ideas.

Several artists whose work was rejected from the all important year end exhibit at the Academy in Paris wrote to the emperor, Napoleon IIIl in protest. He determined that the public should be allowed to decide for themselves and offered a separate exhibit in a different part of the palace. The exhibition, called the Salon des Refusees, began in 1863 and held annually afterwards, included Gustave Courbet, Manet, Whistler, and Pisarro. Public taste turned toward these painters and those that followed.

The genre called "Impressionism" emerged in the late 1800s and included a diverse group of painters who rejected the traditions of academic painting. The painters that fall under the umbrella term of "Impressionism" demonstrates a vast array of styles, subject matter, and skills. They generally share the influence of photography, an interest in capturing light and shadow, and in expressing life as it is experienced, as opposed to the idealized versions painter before them.

The availability of TUBES of paint and brushes that came in a VARIETY of sizes of shapes (rather than the tradition round) allowed them to experiment outdoors by bringing their paints and easels with them. The tubes and brushes were a result of changes in manufacturing and meant that more people could buy ready made paints.

This project involves writing and sketching.

Choose three objects that you feel a personal connection to. Briefly write a description of what they signify or why they are important to you.

Create a series of "thumbnail" sketches (these are small, quick sketches). It is important to draw a rectangle or square first and compose your sketch inside of that shape so that you are positioning the objects intentionally.

I would like to see a minimum of 10 sketches, with a different arrangement of the objects in each. Consider the spaces between the objects and edges and try to make those spaces different from each other in each sketch.

Consider the lighting as you arrange your still life. When lit from the side, either by a lamp or placing near a window, the shadows on the form make the volume easier to see and draw.

Rearrange your objects for each sketch, or change your position so that you see them from a different angle. Your sketches can be simple outlines with some shading, like these: